One of the ways Music Network actively supports and promotes the work of contemporary Irish composers is by commissioning new works for its National Touring Programme. Watch performances of recent commissions below and read the programme notes from each composer.

Commissioned by Music Network for Baroque violin and harpsichord, this piece was first performed in a programme surrounded by the music of Bach. I drew on some general impressions of Bach's music, the style of the period, and also the particular qualities of sound inherent in these two contrasting instruments from another era. Open strings, harmonics and arpeggiations create stretches of rich sonority from the violin, while the harpsichord's plucked strings make sharp incisions into these lines. Alongside rhythmic passages there are free sections where the music escapes into a timeless space.

'Fantasia' was a form often used by Bach, described as 'the play of imaginative invention'; the term implies freedom, unpredictability, an element of surprise. As the music flows, moving forward and reaching upward, it takes some twists and turns, and a resonance from the past filters through.

2018.3 emerged out of some improvisations on the viola da gamba, and aims to find common ground between the sound of the viol and of the violin family. I wrote the piece straight after two very complex works, full of things that were difficult to write and are difficult for players to learn. Perhaps in reaction to this, I made this piece into a semi-improvised work with a very open, warm sound world. It seemed natural to leave some elements of the piece open to improvisation, given that the material was worked out that way in the first place. As I worked out the material, I looped short snippets of recorded chords and played over them, trying to find shared resonances and moments of conflict.

'The white calm of unselfsh love wrapped Edward, for he felt that he could make Hazel happy. As he fell asleep that

“She was made for a minister's wife.”

Reddin, leaning heavily on the low wall, staring at the drunken tombstones and the quiet moon-silvered house, thought:

“She was made for me”

Both men saw her as what they wanted her to be, not as she was'

My piece, Gone to Earth is inspired by a novel of the same name, written by Mary Webb. 'Gone to Earth' is also a term used in fox hunting, when the hunted fox has taken refuge, hidden from its predators. The plot of the book centres around one female character in the middle of the obsessed 'love' of two men. There is a supernatural backdrop to the plot represented in the mythological 'wild hunt' of the death hounds, which encapsulates the theme of the book; predatory behaviour and men’s desire to take what they feel is their own.

I was immediately drawn in to the book, stunned that it was written in 1917, and angry that the notion of the predatory hunt and desire to control women is still very much a threat to womens lives today. The musical material attempts to represent a propulsive chase followed by a respite and refuge.

sin títolo (‘without title’) is based on a madrigal by Carlo Gesualdo da Venosa (1566-1613). But the aim was less a tribute to the great madrigalist than a need to have a structure upon which to create a new work. The madrigal chosen therefore also remains sin títolo, as I don’t wish to direct attention towards any similarities or differences that may exist between the two works. The nature of a cello and guitar duet is completely different to a five-part vocal work; however, the cello part does absorb melodic lines drawn from the vocal parts – sometimes from the base, sometimes from the soprano and alto lines. The complex, interrelated nature of Gesualdo’s madrigal writing refuses a simplistic reduction to mere melody and accompaniment, and thus the very nature of the original is radically transformed.

Despite its vocal source, this is an instrumental work for cello and guitar. While the cello part plays melodic lines, I also wanted to make sure that timbre, texture, microtonality, rhythmic articulation and tonal variation played a significant role in the final result of those ‘melodies’. The guitar part’s role is predominantly supportive to the cello’s lines, but considerable skill is required to maintain a deceptive simplicity, as the unusual harmonic formations are far from easy to execute.

In preliterate times, seasons were observed by the hours of light, weather patterns and lunar cycles, rather than any set calendrical date. Stories were invented and handed down generation by generation, in order to explain the astronomical divisions of the year; the vagaries of the weather and the shortening and lengthening of the days.

In the folklore of Ireland and Scotland, the Cailleach was the embodiment of winter, among many other things. Incarnated as an old hag at the end of Autumn (Samhain) she brings winter’s elemental destruction until she is recreated once again at the beginning of Summer (Beltaine) as a young maiden.

These four short piano pieces take their title from a Scottish Gaelic legend which depicts the multitudinous ways the Cailleach casts her hibernal spell from Ben Nevis over her lands, until she is transformed, inevitably (and annually) into Spring.

The word ‘edge’ conjures up the idea of sharpness but it can also refer to extremes of nervous tension, to ‘being on edge’. Tentatively, we edge towards something fearful or become immobilized with apprehension as the feared entity edges towards us. Although the title was applied when the string quartet was almost finished, these are the qualities found in the music. Tension is created initially by high, hovering, barely moving individual parts; later the sliding, falling sensation which can be heard early on, becomes extreme, moving to the lowest registers of the instruments.

Deirdre Gribbin – ‘Through every wind that blows’

Connla’s Well has been an inspiration for Irish poets for centuries. Surrounded by nine hazel trees the ripe nuts fell into the well feeding the ‘salmon of knowledge’. Reputedly those who ate the nuts or the salmon would have immediate and profound knowledge, mystical insight and the ability to create visionary poetry.

The well was known to be the source for seven Irish rivers. Women were forbidden to go near it but the beautiful Sinaan, granddaughter of the sea god Lir wanted this knowledge. Approaching the well she ate the salmon. The water rose in a torrent engulfing her new-found power into a mighty river. From the name Sinaan it became the river Shannon.

This title is from George William Russell :

“And when the sun sets dimmed in eve and purple fills the air,
I think the sacred Hazel Tree is dropping berries there
From starry fruitage waved aloft where Connla’s Wello’erflows;
For sure the enchanted waters run through every wind that blows.”

In the music there is strong robust interplay between the soloist trumpeter and pianist. Fragments are repeated and distorted with rough-edged wah,wah rasping mutes. The soloist emerges into the foreground, is meshed with the filigree piano line, and eventually is drawn upwards, ending in quiet trance-like reflection.

This work is a 21st-century response to the idea behind Vivaldi’s 'Four Seasons', as seen through the lens of American artist Cy Twombly’s major work from the 1990’s, ‘Quattro Stagioni’. Involving the talents of four of the finest violinists in Ireland – Mia Cooper, Ioana Petcu-Colan, Katherine Hunka and Helena Wood – Quattro Stagioni consists of four “concerto”-type movements: each of the four violinists has their own focal movement, where the other three act as the ‘ripieno’ group. The character of each movement is inspired by one of Twombly’s ‘Quattro Stagioni’ paintings: 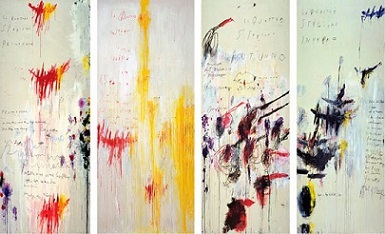 This work is not only a celebration of the finest violinists on the island, but also a meditation on the cyclical nature of life and as such is full of colour, texture and emotion.

This piece was commissioned by Music Network for the current tour by Dionysis Grammenos and Anneleen Lenaerts. Although I was not required to ‘respond’ to the music already programmed – as is sometimes the case with commissions – it seemed the most natural thing to consider the context in which the new piece would be heard, namely, in a recital of 19th-century repertoire. Therefore, my mind was not far from the musical gestures of the Austro-German world of Schubert and Schumann.

The harmonic language of my piece shows tiny glimpses of characteristic 19th century writing, for example, in the leading semitones, but I also drew on a group of pitches from Elliot Carter’s solo clarinet piece 'Gra' (1993), and set about establishing how a group of notes from 'Gra' might be voiced on the harp, and which of its transpositions would best suit the harp’s chromatic pedal mechanism. I also rearranged these pitches in such a way as to provide harmonies idiomatic to the soundworld I wanted to achieve.

As a composer, who also plays what is often a gender-stereotyped instrument, I was reminded of the work of Clara Schumann (Wieck) and looked to her piano music and lieder for a suitable ‘cell’ from which to grow further ideas. One such cell is drawn from the first of her piano preludes Op. 16 (which precede her fugues), and so the sound of her first name, if not the spelling, is incorporated into the title of the piece. The title also deliberately contains the word aria, since some of tonight’s programme is drawn from vocal repertoire, and the idea of writing an ‘aria’ for clarinet is one I found appealing.

Deirdre McKay – ‘a quarter million miles from the moon’

Since writing my third quartet, 'mr shah stares to the heavens', the incomprehensibly vast quietude of space has become a fixture in my thought: space, being an almost perfect vacuum, is not well equipped to support sound.

In an age promising earthlings commercial flights to the moon, if you’d like to experience the sensorial beauty of skilled musicians playing live on exquisitely crafted instruments, you need to visit Planet Earth.

With this thought, comes a deeper appreciation of sound as a phenomenon. It draws the ear closer, as though not a note should be wasted. Something of the weightlessness, the immense quietude of a vast soundless space, something of a renewed preciousness in each individual note, fused in this soundworld.

Marian Ingoldsby – ‘Never give all the heart’ (Yeats)

‘Never give all the heart’ was composed in response to a Music Network commission – a setting of the WB Yeats poem for baritone and piano. The poem contains a gamut of emotions, from blind love to romance, passion, frustration and loss, and I have tried to encapsulate all in this short song. The piano and baritone remain interactive in the main, here and there the piano assumes the role of accompaniment for atmospheric purposes.

I have used simultaneous D major and E major tonalities, alongside some delayed rhythmic patterns, echoing the sense of pain and longing. Chords are almost but not quite, consonant, never settling anywhere, but becoming at times darker and more dissonant throughout. The rhythm does however settle as the poem moves towards its conclusion, where hearts are ‘given… up to the play’. The tessitura of the baritone is varied, highlighting the general tenor of the lines of poetry.

'the Byrne, with its beautifully shaped phrases, has sensitive solos in a profound pastorale to contrast its jazz dancing elements elsewhere. Byrne's score fits Chatham's closely-knit ensemble like the proverbial glove'.