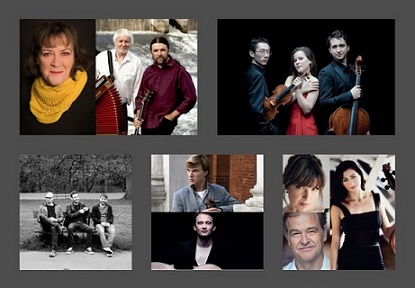 Music Network’s Autumn 2018 season features all the ingredients for another fantastic feast of music providing a unique opportunity to hear the very best in international jazz, chamber and traditional music – 32 concerts performed in 21 intimate venues countrywide from September to December 2018. Details at musicnetwork.ie.

“The season gets off to a flying start” according to Music Network CEO Sharon Rollston “as two of Ireland’s finest traditional musicians – button accordionist Máirtín O'Connor and guitarist Séamie O’Dowd – accompany the living songbook and national treasure that is vocalist Maighread Ní Dhomhnaill.”

She continues: “In October, experience the consummate musicianship of the multi-award winning Amatis Piano Trio, widely acclaimed for their intensity, passion and beautifully-nuanced performances. Then it’s full steam ahead as Mercury Award-nominated Roller Trio brew up a heady genre-bending mix of rip-roaring grooves, dubstep style electronica and cool melodies for audiences nationwide.

In November, virtuosi Russian violinist Yury Revich and German cellist Benedict Kloeckner bring passion and tenderness to what promises to be a breath-taking journey through some of the most exquisite pieces in the classical canon. Tre Voci close the season with a trinity of concerts exploring three wonderfully expressive instruments by the illustrious Natalie Clein (cello), Julius Drake (piano) and Claire Booth (soprano)."

Amanda Feery and Sebastian Adams have been commissioned by Music Network to write new pieces for the upcoming season, continuing its work of actively commissioning new works by Irish composers, and promoting existing works within relevant concert programmes. Amatis Piano Trio will premiere Feery’s composition in Castlebar in October, while Adams’ work will receive its premiere performance from Yury Revich and Benedict Kloeckner in Dublin city in November.

Music Network’s mission is to make live music available and accessible to as many people as possible, giving Irish audiences the chance to experience the very best in international chamber, jazz and traditional music in venues throughout Ireland at affordable prices. All tours are co-promoted with a network of valued partner promoters across the country in order to develop local capacity to provide musical activity. In addition, Music Network connects its tours with music education programmes and groups around the country including Music Generation participants, primary, second and third level students, Music Capital Scheme awardees, and music schools and groups nationwide.

Music Network tours are funded by the Arts Council. Tickets for all regional concerts are available from individual venues (booking fees may apply). Single tickets for Dublin concerts range from €10 – €30 (including free programme) and can be purchased by calling Music Network on (01) 475 0224 or booking online at www.musicnetwork.ie. Season tickets including all five Dublin city centre concerts are available from €65, and a Classical Bundle for three performances can be purchased for €50. Online booking fees apply. 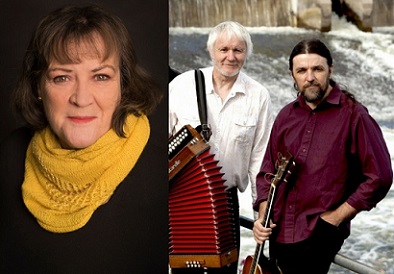 “Dark and deep, sonorous and controlled” – The Irish Times [on Ní Dhomhnaill]
“One of the most versatile Irish button accordion players” – Folkworld [on O’Connor]
“Musical legend” – The Independent [on O’Dowd]
“[her singing]… left the audience in trance”– Folkworld [on Ní Dhomhnaill]
“Technical brilliance and flamboyant style” – Irish Music Magazine[on O’Connor]
“Séamie O’Dowd’s guitar conspire[s] to create a glorious, unfettered soundscape” – The Irish Times

For this very special tour, the swashbuckling musical spirit that has seen Máirtín O'Connor and Séamie O’Dowd dazzle audiences in the past provides an anchor to the shimmering vocals of Maighread Ní Dhomhnaill — with the promise of free-flowing instrumental duos to boot.

Maighread Ní Dhomnaill, winner of TG4’s “Traditional Singer of the Year” award, formed the band Skara Brae before touring the world with Donal Lunny’s Coolfin. She sings and tours most often with her sister Tríona and their recent concert performances with Martin Hayes, Denis Cahill and David Power have met with widespread critical acclaim.

Máirtín O'Connor’s dexterity and versatility on the accordion have seen him perform with a veritable who’s who of trad legends including Midnight Well, The Boys of the Lough, De Dannan, Skylark and the Riverdance orchestra.

One of Ireland’s foremost trad musicians, Séamie O’Dowd is a renowned multi-instrumentalist most associated with his performances as a member of trad powerhouse Dervish. He has also collaborated with such musicians as Christy Moore, Cathal Hayden, Jimmy Higgins, Tommy Emmanuel, and Liam O’Flynn. 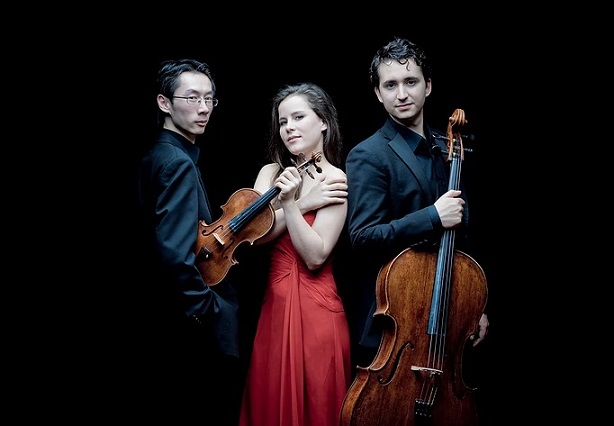 Just weeks after forming in 2014, this exhilarating young piano trio won the audience prize at the Grachtenfestival-Concours in Amsterdam, quickly leading to their debut at the Royal Concertgebouw. Since then, they’ve taken the chamber music scene by storm, winning a slew of international prizes including the 2015 International Parkhouse Award in Wigmore Hall. For the 2018/2019 season, the trio has been selected as ‘Rising Stars’ by the European Concert Hall Organisation, which will see them perform in 23 prestigious concert venues across Europe.

The three players combine to create a gloriously balanced sound, the sensitivity of Dutch/Chinese pianist Mengjie Han a wonderful counterpoint to the exuberant energy of British cellist Samuel Shepherd and the delicate precision of German violinist Lea Hausmann. Known for playing intense and often highly charged programmes, with a repertoire spanning from Haydn to Shostakovich, the trio is equally committed to contemporary works, in 2015 founding the Dutch Piano Trio Composition Prize to encourage young composers to further the repertoire. On this tour they will premiere a new work by Irish composer Amanda Feery, commissioned by Music Network. Always lyrical, often surprising, catch this trio while you can! 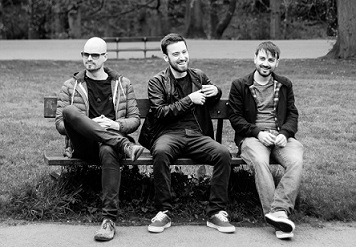 Expect plenty of punchy grooves, high octane technicality, deceptively catchy riffs and swirling electronica as the Mercury Award-nominated Roller Trio roar into town, delivered with a trademark swagger and visceral energy that has seduced critics and fans alike. Influenced by everyone from Fly Trio and Tim Berne to Queens of the Stone Age and Flying Lotus, the Leeds-based trio waste no time in getting heads bobbing with their idiosyncratic blend of pin-tight beats, cool melodies and juddering stop-start motifs.

New to the line-up, Chris Sharkey brings bass and ambient wizardry to the mix, his dark, multi-layered textures the perfect foil to James Mainwaring’s John Zornian abstract-sax and the ingenious, twisting grooves of drummer Luke Reddin-Williams. 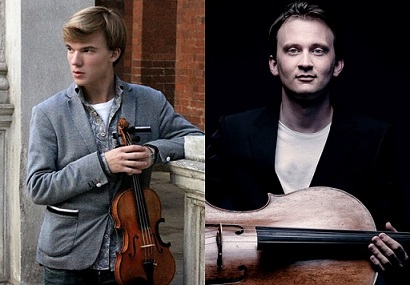 A true virtuoso – and an impassioned believer in making the violin “sing” – Yury Revich made his debut at Carnegie Hall in 2009 and since then has performed in many of the world’s most prestigious concert halls. Winner of multiple awards, including the Young Artist of the Year at the International Classical Music Awards in 2015, Revich is a dedicated chamber musician, collaborating with renowned artists such as Daniil Trifonov as well as founding Quatuor du Soleil.

One of Germany’s most acclaimed young cellists, Benedict Kloeckner has been lauded for his “glowing, ethereal tone” and “perfect intonation”. In addition to performing as a soloist in venues such as Berlin’s Philharmoniker, the Barbican Centre and Carnegie Hall, Kloeckner is a much sought-after chamber musician, collaborating with such luminaries as Sir András Schiff, Anne Sophie Mutter, Gidon Kremer and Christoph Eschenbach.

Music Network has commissioned Sebastian Adams to write new music for this tour. 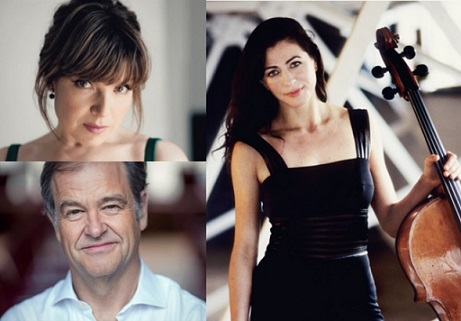 “Astonishing range of colours and... wide variety of expressive styles” –Gramophone Magazine [on Clein]
“[He] delivered an outstanding performance at the piano” – The New York Times [on Drake]
“…a warm, silvery voice, crystalline passagework and a delectably flutey top...” – The Times [on Booth]
“A golden timbre and fleet elegance…this is as close as you'll get to musical champagne” BBC Music Magazine [on Clein]
“Julius Drake’s exquisite piano accompaniment was a constant joy in a performance which, characteristically, always did more than support, yet somehow never overwhelmed or eclipsed, his fellow musicians.” – Bachtrack
“The clear, cool soprano of Claire Booth curled around the words and music, fusing them into something eloquent, poignant and touching” – Chicago Tribune [on Booth]

For our end of year concerts, this consummate trio have come together to curate an intriguing exploration of three wonderfully expressive instruments. It’s oft said that the cello is close to the human voice, and Clein’s cello quite literally “sings”, matched by the delicacy and lyricism of pianist Julius Drake and the soaring tones of soprano Claire Booth.

Renowned for an extraordinary breadth of repertoire, Booth’s operatic highlights include Elcia in Rossini’s Mose in Egitto, Elle in Poulenc's Voix Humaine and Rosina in The Barber of Seville. The trio have captivated audiences everywhere, winning plaudits for their dynamic energy and strong sense of narrative.

Clein is a sought-after chamber performer who has featured as a soloist with such orchestras as the Philharmonia, Hallé, City of Birmingham Symphony, and Montreal Symphony, while pianist Drake enjoys an international reputation as one of the finest instrumentalists in his field, appearing regularly at such venues as Carnegie Hall, the Concertgebouw and Wigmore Hall, London.